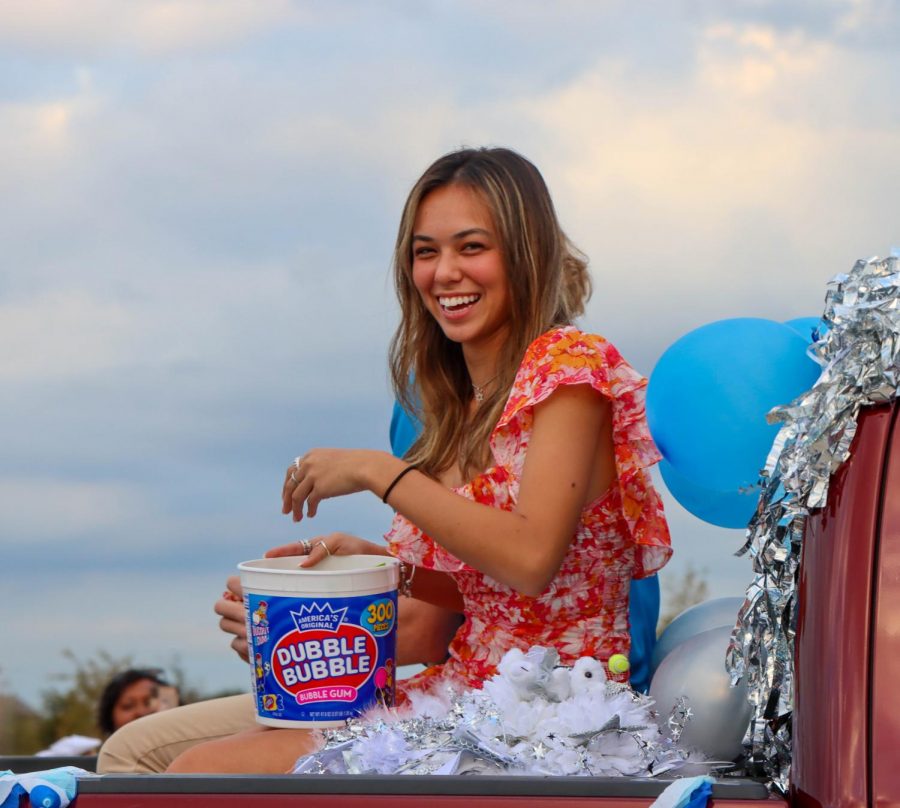 Senior Eliana Ho ran for Homecoming court Queen in order to have a memorable senior year experience. "I felt like I would be a great fit to represent Rock Hill as a member of our athletics, being in Tennis, and also representing our Asian student community as the co-president of ASU (Asian Student Union)." The nominee ran with senior Brett foss, and both were later announced as King and Queen at the Homecoming game on Friday, Oct. 22nd.

Excitement buzzed in the air, emanating from the wave of blue-clad fans as they waited for the parade to begin.

Rock Hill High School community members lined up around the school grounds to watch the Homecoming parade start at 6 p.m. on Wednesday, Oct. 20th. This was their first-ever community Homecoming parade held by RHHS as the Forthcoming parade they had scheduled for the year prior had been canceled due to COVID-19. All Prosper ISD feeder middle and elementary schools had also participated in the parade.

Various RHHS sports teams and extracurriculars had the opportunity to decorate floats and march the parade route showing off their school pride and accomplishments.

“[The parade] is such a great community tradition that brings everyone together to celebrate,” said theatre director Sariea Haney. “I love that it showcases so many student organizations and sports.”

As a Prosper tradition, parents and children gather along the streets to grab candy and celebrate as the various floats pass by.

“My favorite part of the parade was definitely seeing the community and handing out great amounts of candy to little kids,” said senior and Homecoming Queen nominee Eliana Ho.

The community pep rally followed immediately after the parade at the football field. At the pep rally, all the underclassman Homecoming court winners were announced and crowned. Homecoming King and Queen were announced at the start of the Homecoming game on Friday, Oct. 22nd at the Children’s Health Stadium. The pep rally also featured performances from the cheerleaders, Rockettes, color guard, and band. The spirited night concluded with a bang as fireworks were fired off to round out the night.

On Nov. 5th, the Rock Hill High School varsity football team will be versing Lebanon Trail at their game at the Children Health Stadium starting at 7 p.m. As this is the final game of the season, students are encouraged to wear neon colors to show school spirit.