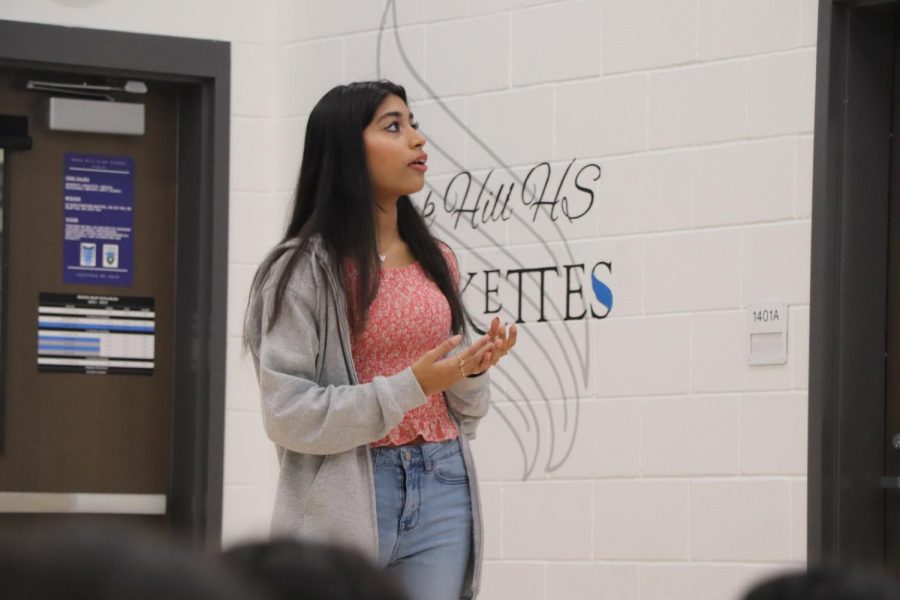 During the interest meeting of Rock Hill High School’s Bollywood Dance Club on Aug. 18, senior Kushi Sharma was pleasantly surprised as about 20 people, more than she expected, made their way into room 1401 to listen to Sharma introduce the club and get a feel for its atmosphere. The club started earlier in 2021 when RHHS first opened its doors, but this will be the first year the club can have regular in-person meetings.

“It was a new school with new opportunities,” Sharma said. “I used to dance in a group where I lived [in New Jersey] and hated that I didn’t get any of that here. I’ve seen a lot of talent here in Rock Hill and the people on the team right now are so talented. That made starting the club worth it.”

After the Bollywood club performed in March at the RHHS talent show, the club got many students reaching out to inquire about joining the club. Sharma hopes the club keeps getting publicity as they perform more. RHHS junior Niranjan Swaminathan got interested in the club after watching the talent show performance, noticing that the club seemed enjoyable and would be a way to participate in modern Indian culture.

“Bollywood isn’t as sharp and clean as classical dance, it’s very structured, you know,” Sharma said. “Bollywood is more of a graceful, anything-works and fun type of dance. The song we [danced to in the interest meeting] is mainly belly dancing, which has roots in older Indian traditions.”

In the 2020-2021 year, the club only had female members, and thus the choreography, Sharma felt, was inevitably feminine. The club is still female dominated, but this year the club looks forward to accommodating more male parts in its choreography to simultaneously go against the stigma male dancers might face.

“I hope more boys will join as I would love to not be one of only two boys,” Swaminathan said. “Hopefully I can make an example of myself and get more boys in the club, who might want to join but think Bollywood is girly or just for girls. I’d like to show them otherwise.”

Last year the club resorted to only virtual meetings and practice, and though they had a few in-person rehearsals, it was a hindrance to forming a community and building the club’s atmosphere. With the dance room available this year, with its mirrors and sound systems, the club looks forward to a more involved and energetic year.

“Last year was tough as only four of the members were on campus and the rest were online; it was tough to keep the club going together,” Bollywood club sponsor and RHHS teacher Brendon James said. “With the restrictions being a bit more loose this year, we’re able to gather more members and we’re hoping to do better than what we did last year.”

The club now meets every Wednesday after school in Rock Hill’s dance room. The dancers are currently rehearsing a performance for the school’s Sept. 2 pep rally. As the rush of these practices slows down, they will introduce leadership positions and include a technical team.

“The club is an extremely friendly environment,” James said. “Everyone there wants everyone to succeed, we all push each other, and we’re also understanding of people’s personal lives; we will always work with them. We want people to know that we’re inclusive to men and women, non-dancers, and we have a lot of fun.”