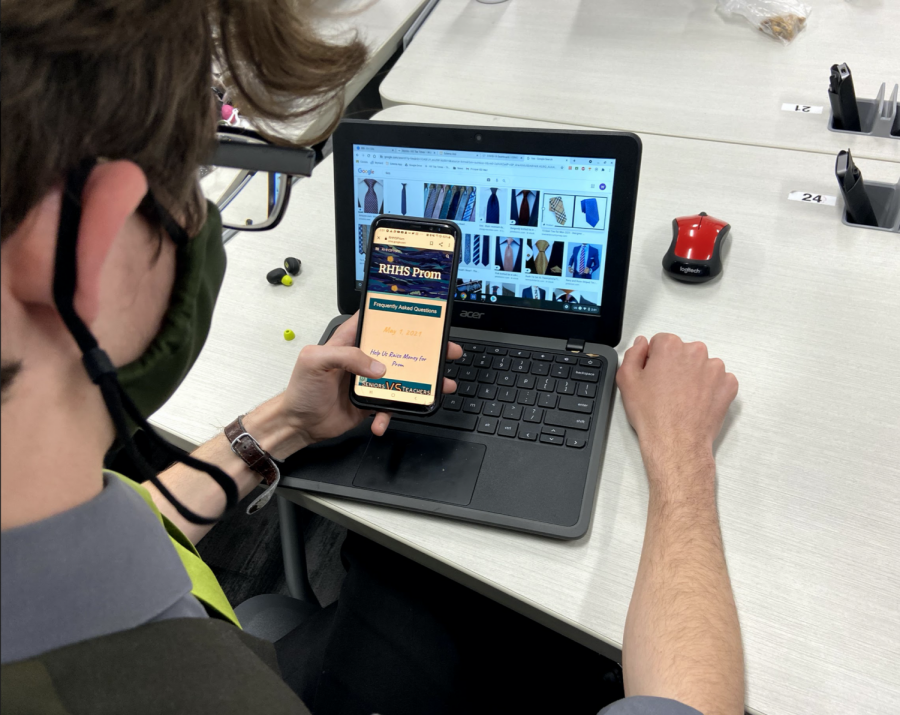 A student looks at prom information and shops for a suit. The first prom will be at the Legacy West Renaissance in Plano. "It's the first ever Rock Hill prom which is really cool," principal Dustin Toth said. "The venue is awesome down there in Legacy, and it's a brand new hotel. It's going to be a nice, fun time, especially after doing hardly anything for the last year."

Juniors and seniors will dance the night away at the Plano Renaissance Legacy West Hotel from 7:30 p.m. to 11:30 p.m. May 1.

“The venue is a beautiful space with a balcony overlooking Legacy West,” prom coordinator Jarred Stewart said. “Rock Hill will be the star of the show in Legacy West that night. The venue is also surrounded by dozens of wonderful restaurants if students want to have dinner first. However, we will have a great selection of savory foods and desserts.”

Beyond dancing, there will be photo stations and oversized games. The school will also offer snacks, drinks and dessert at prom.

“It’s a really nice set-up,” principal Dustin Toth said. “I think it’s going to be a casino night-type thing, and there will be some other games that aren’t casino related.”

“We would not expect students to wear their masks if they are dancing as that’s a more physical activity,” Toth said. “However, we would ask that if they leave the room to go to the restroom or take pictures on the hotel grounds, they put their masks back on out of respect for the policy the hotel has in place.”

Any PISD junior or senior is invited; however, if students wish to bring a non-Rock Hill student to prom, they should fill out this form by April 21.

“There’s a little balcony behind where the DJ will set up that is really cool for pictures,” Toth said. “We hope it will be a really nice night for everyone.”

The committee has been working on prom since this time last year.

“The theme is ‘Starry Night,’ Stewart said. “The decor will feature both stars and the blues and imagery of Van Gogh’s Starry Night.”

There is no set dress-code for prom, but administration can deem an outfit inappropriate.

“It’s the first ever Rock Hill prom which is really cool,” Toth said. “The venue is awesome down there in Legacy, and it’s a brand new hotel. It’s going to be a nice, fun time, especially after doing hardly anything for the last year.”

Prom King and Queen will be announced at the event around 9:30 p.m.

“This will be Rock Hill’s first prom with the very first Prom King and Queen,” Stewart said. “Beyond the great music and food, this will be the only time this year we’ll have to celebrate our new school, the end of a challenging year, and our first class of amazing seniors.”