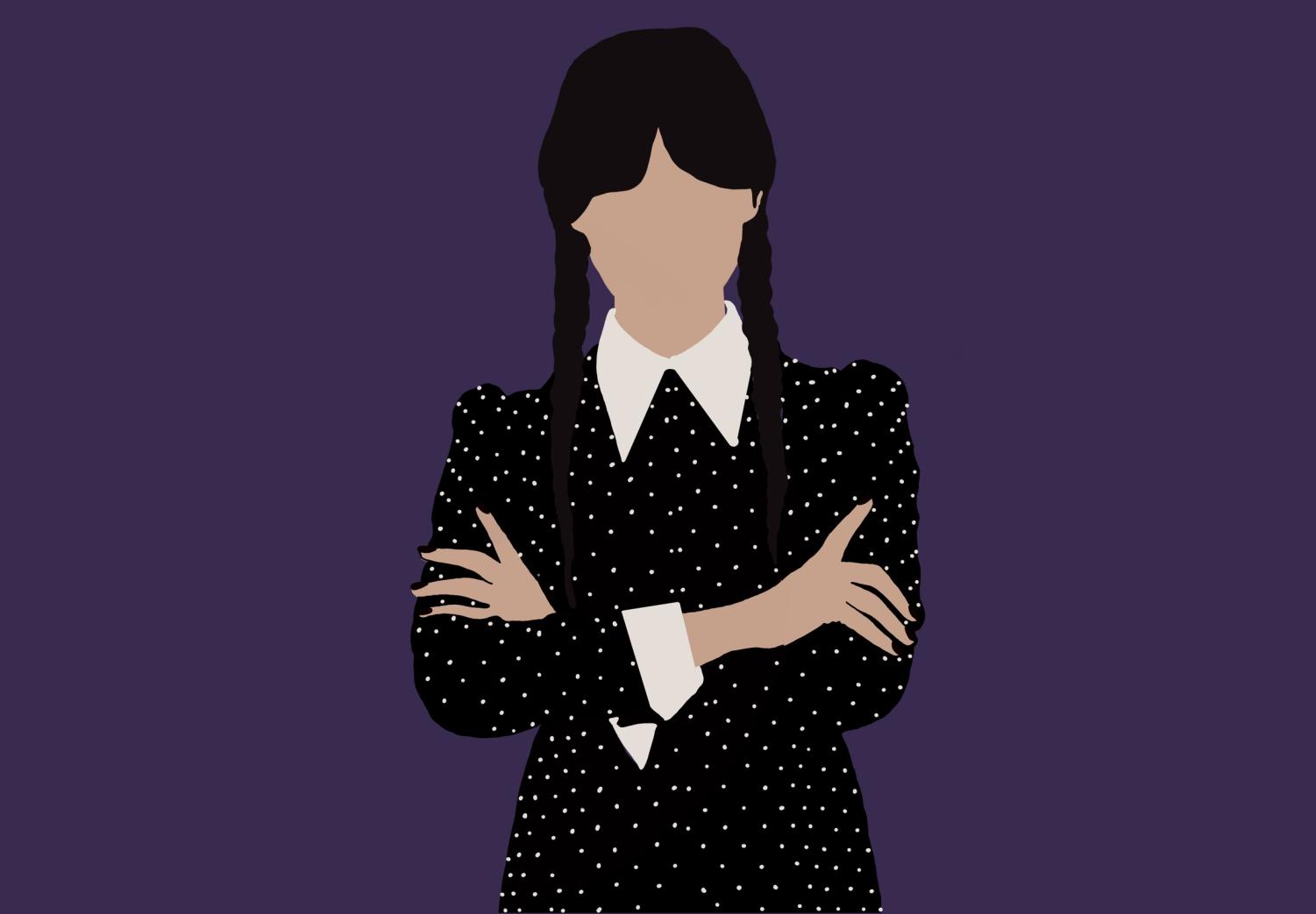 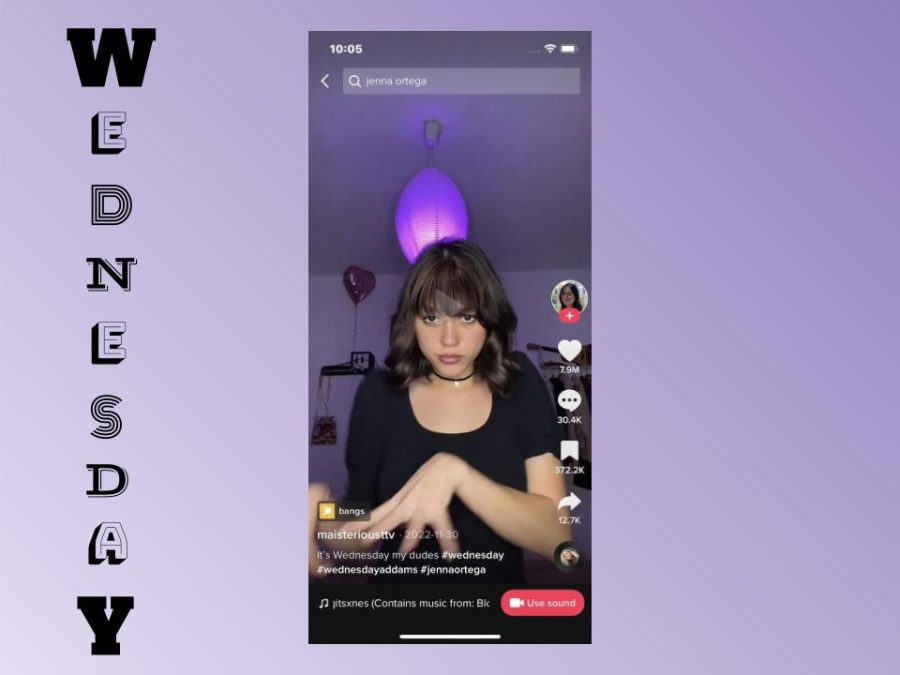 Digitally constructed image created by Jade Kratochvil represents the Internet’s obsession with “Wednesday.” Along with millions of others, TikTok creator @maisteriousttv performs the dance featured in “Wednesday.” Credit: TikTok

Gothic filmmaker Tim Burton directs his first TV series and it’s a huge success. The Netflix original “Wednesday” dropped on Nov. 23. Within a week of its release, “Wednesday” set a new record for the most watched English-language Netflix show with 341.2 million hours of viewing. This record was previously held by the highly anticipated season four of “Stranger Things” with 188.2 million hours of viewing in the first week of its release. So far, “Wednesday” has yet to knock “Squid Game” off its high horse as the most watched Netflix show of all time, and sits at number three on that list.

A modern twist on the twisted family

Most of the series’ scenes were filmed in Romania, birthplace of Dracula and home to all things creepy and kooky. Honoring the mysterious mansion in the ‘60s sitcom “The Addams Family,” location scout Tracey Savein finds equally eerie and ancient buildings for “Wednesday.” Namely, Cantacuzino Castle is used for exterior shots of Nevermore Academy while the dorm rooms and halls were shot inside the Victorian style Casa Monteoru built in 1874.
Breakout star Jenna Ortega plays titular Wednesday Addams in what Netflix is calling a “sleuthing, supernaturally infused mystery.” Ortega tells Rotten Tomatoes, “I’ve been compared to Wednesday all my life in terms of my sarcasm and dry humor, so it’s oddly fitting.”
Christina Ricci, who played Wednesday in the 90s movies “The Addams Family” and “Addams Family Values,” also appears in the show as Marilyn Thornhill, the only “normie” teacher in a school full of outcasts. In an interview with MTV News, it was revealed that the two Wednesdays steered clear of any mentoring out of respect for the uniqueness of each character. “I didn’t want to rip her off and I didn’t want to be too much like her,” Ortega said. “They’re two very different people, our Wednesdays.”
The Addams clan has bewitched the world for generations, reimagined many times since their original debut in 1932 by cartoonist Charles Addams. Costume designer Colleen Atwood updates Wednesday’s wardrobe, incorporating modern trends such as platform sneakers while staying true to the spirit of the Addams’ macabre daughter.

The Addams are misfits–they eat weird food like salamander sandwiches and scorpion stew, dress differently and have strange interests–all the inklings of how immigrant families have been perceived in hostile environments. Gomez Addams, the patriarch, has consistently been portrayed as Hispanic. In the 60s show “The Addams Family,” he calls his wife Morticia “querida” and dances the tango.
“Wednesday” further explores the already implied Latinx roots of the Addams family in both casting and scripting. Ortega, of Puerto Rican and Mexican descent, is the first Latina Wednesday, and even though she doesn’t speak Spanish, the Latinx community is loving her.
“Wednesday is technically a Latina character and that’s never been represented,” Ortega said in an interview with Netflix. “So for me, any time that I have an opportunity to represent my community, I want that to be seen.”
Aside from casting decisions, the series also touches on Gomez’s Mexican heritage in moments like when Wednesday mentions Dia de los Muertos, a traditional Mexican holiday.

Dating back even months before its premiere, countless interviews and behind-the-scenes footage were posted to social media in order to gain publicity. Arguably the most prevailing clip is Wednesday’s dance performance in episode four, “Woe What a Night.” At the site of the Rave’N, Nevermore’s annual prom, Wednesday breaks out in unconventional dance moves to the tune of The Cramps’ “Goo Goo Muck.”
In a video interview, Ortega reveals she choreographed the routine herself, even though she has no official training.
“I took inspiration from things like Siouxsie and the Banshees and Lena Lovich and just old music videos of Gothic artists. I watched footage of Goth kids dancing in clubs from the ‘80s. Then I just pieced it all together,” Ortega said.
The dance scene has a chokehold on TikTok and doesn’t seem to be letting go any time soon. Across the world, millions of creators are dressing up in their best Wednesday Addams outfit and embodying the dance, only to a different song.
However popular the dance may be, it is nevertheless shrouded in controversy.

In an interview with NME, Ortega admitted she filmed the viral dance scene when COVID-19 positive. She wasn’t aware of this at the time though, as she was said to be waiting on her test results.
“I woke up and I had body aches. I felt like I’d been hit by a car and that a little goblin had been let loose in my throat and was scratching the walls of my esophagus,” Ortega said.
MGM, the studio that filmed “Wednesday,” claimed “strict COVID protocol was followed and once the positive test was confirmed, production removed Jenna from the set.” Netflix backs up these safety promises.
Fans, though, are criticizing Netflix and the producers of “Wednesday” for the way the situation was handled, as well as Ortega for showing up to work sick. Some news sources are also blamed for making it out as an actress persevering past hardship rather than a breach of CDC guidelines.

On January 6, Netflix broke its six-week-long silence and announced the renewal for season two. “More misery is coming. The global phenomenon will return for season two,” Netflix said in the Twitter announcement. Simultaneously, a video announcement was released on YouTube where Ortega says “Over the past few weeks I’ve been hunted, haunted, and mimicked millions of times across the internet. It’s been pure torture. Thank you.” 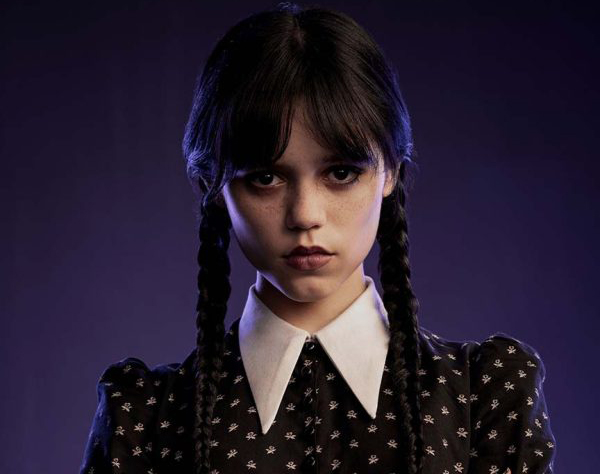 The new TV rendition of the Addams family member “Wednesday” has taken the world by storm.

This new series was projected to storm the charts, but not in the way that it has. This horror-comedy series has become one of Netflix’s most streamed series, with 341 million hours.

This show has influenced new trends all over Tik Tok and Instagram, where many people are creating videos doing their own rendition of Wednesday’s dance in the prom scene, sharing different outfit ideas to dress like her, makeup looks to make oneself look like Wednesday and even videos of people trying not to blink, similar to how the “Wednesday” actress Jenna Ortega does in the show.

“Personally, I think it makes me feel a little bit uncomfortable,” junior Eli Palomque said, “They romanticize her body language and personality, but I do think some aspects are cool.”

The series’ similarities to the original Addams Family show is an aspect that is showcased throughout this series that helps to appeal to the older audience.

“I really enjoyed the show,” senior Rhyssa Gibson said. “There are many similarities, of course, the characters, some references to “Hotel Transylvania” within Enid’s family, some of Wednesday’s dance moves, and the relationships the family has with each other.”

Another huge topic of discussion was the casting and direction of the show. Many fans believed that this casting is one of the best castings Netflix has done as well as some of the best direction by Tim Burton.

The actors all tie the show together and make it a great watching experience.”

“I think the casting fits very well with the show,” junior Sioban McGrath said. “Specifically, Jenna Ortega because she has done a great job portraying the character of Wednesday.”

Many fans are saying they have never seen “The Addams Family” or have watched shows like this but are slowly growing to enjoy the genre because of this show.

“I really like this show,” Mcgrath said. “It’s much different from the type of genres I normally watch. I think the cinematography, plot, and actors all tie the show together and make it a great watching experience.”

Fans have even gone on to say that they are now obsessed with the Addams family due to this show but had no idea who they were beforehand.

“I like it because “The Addams Family” was a movie I never really watched because it was kind of old,” junior Katie Mata said. “But, watching this adds a modern twist to make it more watchable for people my age.”

This show was on Netflix’s top shows chart for about a week and quickly advanced to number one. Many teenagers and young adults love this show, and the praise is not scheduled to stop anytime soon. From casting Jenna Ortega and having Tim Burton direct half of the series, Netflix has created a show that is unlike any other.

Although most new shows received backlash from different news sources throughout the first weeks of their release, “Wednesday” has been one of the few receiving a series of praises for many days.

This poll has ended.

How did the Netflix show compare to your expectations?

Thank you for your donation!